Scientists and conservationists are using AI, VR and image-based data to protect the endangered species.

There’s no arguing with the majesty of elephants. These intelligent, complex and emotional beasts have come to symbolize wildlife conservation efforts around the globe. Across the African continent, they are under threat from encroaching human settlements and continued poaching — in the summer of 2018, an aerial survey in Botswana found 87 elephants had been killed and their tusks cut off for their ivory, the biggest slaughter in recent years. But elephants are part of a complex ecosystem and scientists and conservationists know protecting them isn’t just crucial to the species itself, but for other African animals, birds and plants.

Elephants are a keystone species — their presence and activities play a crucial role in maintaining the health of the savannah and forests they inhabit. For example, they use their tusks to dig for water, providing this scarce resource for other species as well. By eating shrubs, small trees and other vegetation, elephants keep the savanna ecosystem from turning into forest. Meanwhile, they deposit the seeds of the fauna they eat, inside nutrient-rich dung that regenerates the soil, enabling those seeds to thrive.

There are only 415,000 African elephants left in the wild, according to the World Wildlife Fund, with habitat loss and poaching the most dangerous threats to the species’ survival. The good news: Advanced technologies, such as virtual reality and artificial intelligence — plus an emphasis on community-led conservation — are helping scientists and conservationists protect elephants and the African wilderness.

Life inside an elephant sanctuary

A nine-minute VR film was created by Conservation International, which helps local communities in Kenya benefit from conservation initiatives, to bring the work of the Reteti Elephant Sanctuary to life. “My Africa,” narrated by Lupita Nyong’o, follows a local Sambaru woman whose aunt works at Reteti caring for a newly rescued baby orphan, and shows how money that elephant-driven tourism brings in helps her care for her livestock. The sanctuary, which rescues, rehabilitates, and rewilds orphaned baby elephants, is the first community-owned-and-operated elephant sanctuary in all of Africa.

To deliver a fully immersive event to audiences, the “My Africa” team chose HP technology, which allowed viewers walk around the inside the VR experience untethered. HP provided a number of VR Backpack PCs to be used for viewings of “My Africa,” such as at the Tribeca Film Festival.

The film’s point of view is as groundbreaking as its VR and 360-degree visuals. “Traditionally,” noted Conservation International CEO M. Sanjayan in a release, “African wildlife films are seen through the eyes of a visitor. In ‘My Africa,’ we flip the script, showing these lands from the perspective of the people who actually live there.”

Virtual reality is a proven tool to build empathy, since it can make one person see through the eyes of another. Once someone virtually becomes a native Kenyan and is immersed in their world, CI’s hope is that they will understand the importance of the Reteti Elephant Sanctuary. “Virtual reality can give viewers that in-depth experience that is so needed to build empathy and, we hope, inspire action,” Sanjayan says. This in turn leads to donations to community-led conservation efforts. “My Africa” is CI’s third virtual reality project; one previous film helped save 10,000 acres of the Amazon rainforest.”

The Elephant Listening Project out of Cornell University is installing audio sensors and recorders across Africa’s Congo Basin to help forest elephants, a species of African elephant. These creatures uniquely vulnerable because their dense woodland habitat prevents aerial surveillance and headcounts by protectors while providing excellent cover for poachers. And poachers prefer them because their tusks are harder, yielding more valuable ivory than the tusks of savannah elephants. In 2011, there were an estimate 100,000; today there are fewer than 40,000.

ELP’s director, Dr. Peter Wrege, hopes a brand-new kind of surveillance will help the good guys rout out the bad by identifying and locating gunshots. He describes his work as “eavesdropping on elephants.”

In Wrege’s current study, ELP has installed 50 sensors throughout 580 sqare miles of the Congo Basin. The team collects the recordings and laboriously analyzes them, searching for evidence of elephant movements as well as gunshots. Once that data is analyzed, the team at ELP can share what they’ve learned with researchers in the field, who make appropriate changes to protect elephants from poachers based on where the gunshots are heard. Initially, the sound files proved to be so huge that the process was taking three months — so by the time a threat was detected, it was too late to help.

Now, a startup called Conservation Metrics has developed artificial intelligence that can separate the low-frequency, long-duration calls of elephants from the ocean of other forest sounds the sensors pick up. Armed with a two-year grant from Microsoft’s AI for Earth, Conservation Metrics slashed the time it took the ELP team to analyze their data from three months to 22 days. The faster that data is analyzed, the sooner rescue groups on the ground can spring into action. CM is developing software that is compatible with Microsoft’s Azure cloud server, so the same amount of analysis may well be doable in a single day.

AI for Earth also helps other conservation groups like Wild Me and the Chesapeake Conservancy created advanced mapping or sift through images more quickly.

To track animals and migrations, many wildlife preserves collect images from drones and planes and install camera traps that take photos when they sense any movement. They end up with hundreds of thousands of images to analyze.

“The vast majority of those images will be empty,” says Dan Morris, a Microsoft researcher working on AI for Earth’s biodiversity initiatives. “You want your cameras to be pretty sensitive, but then the wind blows…and your camera takes a picture of nothing. So you’re literally going through millions of images.” This is the kind of work that AI was “born” to do: stay sharp while barreling through vast amounts data as no human could.

AI for Earth also provides grants for projects that monitor and manage environmental phenomena. The Conservation Metrics project is part of AI for Earth’s biodiversity efforts, which include plans for pollution control, habitat protection and sustainable trade.

These breakthrough initiatives — plus the deepened participation of African elephants’ closest human neighbors — are giving the majestic animals a renewed chance of beating the odds.

“I’m optimistic,” Shana Tischler, senior strategy manager of environmental crime at Vulcan Inc., which is owned by Microsoft co-founder Paul Allen, said in an interview on World Elephant Day. “I’ve observed firsthand public and private sectors and NGOs together embracing technology as a bridge to bringing law enforcement to bear in the field.” 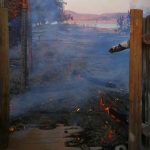 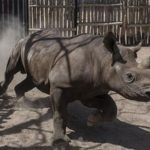 Two rhinos die in Chad after being relocated from SA