Hoedspruit Endangered Species Centre (HESC) has for the first time, successfully released two rhino orphaned from poaching. As the gates opened, and the tentative pair crossed the threshold into the reserve, the magnitude of the moment became apparent. Tears and laughter were shared as Gertjie and Matimba were given a second chance at life, and procreation.

Gertjie’s journey from trauma to triumph

Gertjie and Matimba were brought to HESC in 2014. Gertjie, at three months old, was the first to arrive. Matimba came a few months later and was only one month old. Despite Matimba being the youngest orphan at HESC, it was Gertjie who made an indelible impression on all who cared for him. “Gertjie was a very special rhino. He was so gentle and playful. He stole all our hearts,” said a clearly proud Roode.

There is very little scientific precedent when it comes to what age or stage is best to release rhino back into the wild, but in preparation of the release, the already minimal human contact and interaction is almost completely stopped.

“When we are thinking of releasing our rhino, we usually discuss it with the veterinarian before a final decision is made. Most hand-reared rhino calves are ready for release from the age of five years. This is just to ensure that they are big enough to fend for themselves in the wild. Other than that we also keep an eye on their behaviours to see if they will be able to survive in the wild. We have seen Gertjie and Matimba a few times since their release, and as far as we can tell they’re doing very well and are sticking together,” said HESC General Manager Karen Swiegers. 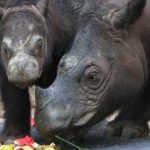 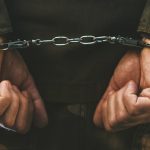